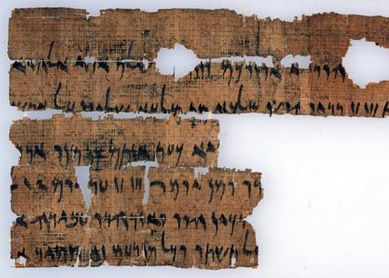 This papyrus fragment is from a letter to the leader of the Elephantine community in Egypt explaining the customs and practices of the Jewish Feast of Unleavened Bread. The letter is written in Aramaic, the language of the Jews in the Persian and Hellenistic periods. The word “Passover” does not survive in the text, but various practices associated with the festival, such as eating unleavened bread and refraining from work, are mentioned. These practices are consistent with rules set out in the Torah and with accepted Jewish practice. Elephantine, an island in the Nile River, housed a military garrison of mostly Jewish soldiers in the Persian period and is today part of the modern city of Aswan in southern Egypt.